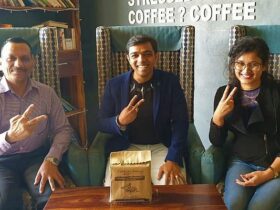 Fireflies the San Francisco and Hyderabad-based AI startup will be using these freshly raised funds to hire new talents which will be distributed across five countries and 12 cities.

It is actively hiring across engineering, customer care, and marketing teams. The startup is also making major investments in technologies like GPT-3 and scaling core engineering efforts to support customer demand.

On Monday, a Voice intelligence and AI assistant provider Fireflies said it has raised Rs 100 crore ($14 million) in Series A funding led by Khosla Ventures and its seed investor Canaan Partners.

Earlier the startup had raised the seed funds of Rs 35 crore at the end of 2019, including the current funding the startup has raised about Rs 135 crore.

The company was founded in 2016 and has offices in Bengaluru, Chennai and Delhi.

Sandhya Venkatachalam, Partner at Khosla Ventures, joins Rayfe Gaspar-Asaoka, Partner at Cannan, on the Board of Directors. Angel investors — who are current or previous executives at Slack, Salesforce, Dropbox, Hopin, and Facebook — also supported the startup.

“Fireflies is extracting insights from one of the largest existing sources of knowledge in a company, which is voice conversations. The Fireflies platform creates a layer of intelligent piping across communication systems that connects the right information to the right people at the right time,” says investor Sandhya Venkatachalam.

From capturing conversations, transcribing meetings to making them easily searchable — Fireflies creates an automated knowledge base for companies. Fireflies can auto-log calls and notes in CRMs, create tasks in Asana, or save meeting recaps to Dropbox.

Due to COVID-19 pandemic it has accelerated the rise in remote working and hence has led people to spend more time of their day in video conferencing with their team.With its Voice Assistant — rolled out in January 2020 — Fireflies has been in meetings, taking notes for over two million people across 200,000 organisations — equivalent to several centuries of meetings compressed in a short period of time.

In fact, it has also expanded to supporting several dialers and telephony systems like Aircall and Ringcentral.

“When we first designed Fireflies, we wanted it to work with the ecosystem of tools that we use every single day. Fireflies connect to your calendar, and can even capture meetings scheduled via tools like Calendly or x.ai. The entire experience can be automated with just a few clicks,” said Co-founder and CEO Krish Ramineni.

“Deep work is about streamlining repetitive tasks so that people don’t lose context while switching between meetings, calendars, emails, and collaboration apps. To be able to orchestrate and automate complex business workflows with just the sound of our voice is something we hope to make possible for every person in the workplace. It starts with democratising voice-powered AI for everyday use cases like meeting notes,” he added.